The three most important things I learned this season.

Every year comes with new challenges. The key is to take those challenges in stride and learn from them. Challenges are good for you. They help you grow as an athlete and, more importantly, as a person. This year I had no shortage of challenges, from dealing with cracked teeth the entire season resulting from a crash in the early spring to putting way too much pressure on myself and eventually (sooner rather than later) cracking, this year was a tough one. But, every year is tough in it’s own way, right? Right.

The number one thing I learned this year is that while putting a little pressure on yourself is good, you want to perform well, you want to be the best, it’s easy to get carried away and overloaded. I say putting pressure on yourself can be good because it will make you work harder. I believe that it is easier to deal with pressure from yourself than pressure from a team or an individual, but that’s just my personal opinion. Anyway, putting pressure on yourself can be good but as with everything in life, moderation is key. If you put too much pressure on yourself, that’s when the stress comes. For me, going into the year on a big new shiny team, I was so eager to prove that I was good enough that every single misstep, every failed race or even training ride, was the end of the world. It didn’t take long to wear on me. I race better when I am calm, I know I’ve prepared the best I can, I know the plan, all I need to do is ride. I learned to go easy on myself, because by April I was my own worst enemy. Once I figured out how to use the pressure to my advantage, in training rather than racing, I got a lot faster (and a lot more fun) to be around. 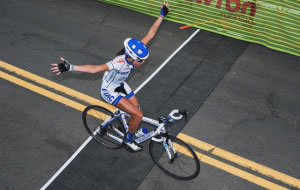 Another really excellent lesson I learned this year was to work on your weaknesses. This was a really fun lesson to learn. It was June, and I wasn’t racing very much, so I called up teammate Cari Higgins and asked if she would race Tour of America’s Dairyland with me. I would be lying if I said she didn’t laugh at first. That was was the general reaction when I showed up on the starting line of the first criterium, why is there a climber in our race? By day 3 I was never farther than 10 places back. By day 6 people no longer gave me a hard time about being at a criterium series, instead they started saying “great race” and “you’re really good at covering,” and by the last day I was one of the gang. It helped a month or so later when I FINALLY made “crit squad,” the group of riders who does the criterium in the states on UnitedHealthcare, my trade team. That was, without a question, the highlight of my year. No, I’m not kidding. I cried. Because it showed how far I had come and how hard I had worked.

Weight is not everything. As a climber, this is a really hard lesson to learn. It’s easy to say it, easy to think it, but the second you’re on that climb and someone is going pas you, you’re thinking “darn, I would have been faster if I was three pounds lighter.” This might be true, you might also have been faster if you’d been sleeping through the night, or if you’d had enough to drink throughout the race, or if you hadn’t been off the bike for 10 days because of a concussion. Weight isn’t everything, and getting totally crazy about dropping two extra points isn’t good for your head, and sometimes it’s not good for your body either. Eating a cookie is not going to ruin your entire season.

From the beginning of the year I started studying diets. At first I was attempting a very low carb, heavy fat and protein diet. I wasn’t losing weight and I wasn’t riding well either. I would get crazy hungry on rides and then every few days completely lose control and eat an entire medium bag of M&M’s. Then, I tried counting calories. Like every single calorie I ate, and not subtracting the right amount of calories I was burning on rides, because I was like “oh I’ll lo 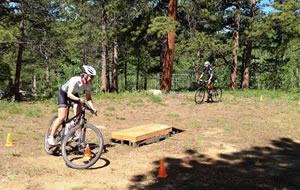 se weight faster.” This resulted in a similar situation as the low carb diet I’d tried, and it was pretty stupid, honestly. I was grumpy, and riding like crap, obviously. Finally, in July, I found what worked for me. Via trial and error, which I think was really good for me, I figured out that I NEED carbs for breakfast if I want to get through a ride alive, and I NEED protein if I want to recover in time for the next day. This is basic science, and every single book about cycling fitness and training will tell you to eat carbs and protein after a ride, but I had to learn it on my own, the hard way. I learned it’s way more important to focus on training and letting the weight lose itself than to focus on weight and have training come second. Writing that now I’m smacking myself on the forehead and thinking it should be common sense, well it wasn’t for a while, but I am so glad I know that now.

This leads me to the last thing I learned, bike racing isn’t everything. It is so so important, especially for women as we will not make a living at racing bikes, to have other interests. If you’re at your target race, for the year, and you fail, you need something else to show you that it’s not the end of the world. Throughout my crazy dieting attempts in the early season, and because I grew up in restaurants my parents worked in, I started to really love to cook. And as the year went on I got more and more into cooking. Now I am plotting going to culinary school and dreaming of opening my own restaurant. It’s so important to be able to focus on something other than bike racing, something constant that isn’t going to change. Boyfriends and girlfriends or friends are great, but you also need to take care of yourself, you need to be able to pick yourself up when you fall, and if you’ve got something in your life that is constantly there, whether it be school, reading, painting, brewing beer, whatever, you’re life in general will be better for it.

Alison only asked me to write about three things I learned but I couldn’t cut out the fourth. To summarize: don’t be too hard on yourself. Always test your weaknesses. Weight is not everything. And have other interests. I think these things are so important, and I can barely wait to use these new lessons next season. The base period for 2016 is about to start and all I can say is, bring on the new challenges! I can’t wait to keep learning and growing next year with the help of Alison Powers and the UnitedHealth Pro Cycling team!

ALP Cycles Coaching is located in the mountains of Colorado, and is a cycling coaching company with over 25 years of professional sports experience. ALP Cycles Coaching is unique in that we have 4 coaches, Alison Powers,  Jennifer Triplett, and Patricia Schwager who each brings her own coaching strengths and personal experiences. We work together to create a training plan that works for each and every person. Visit them online at http://alpcyclescoaching.com