“The worst part about having a job is how it affects your training. Let us be really realistic here – the majority of cyclists in the United States work some type of job.”

April 2013 was my first month of coaching with Alison Powers/ALP Cycles Coaching. Nearly three years later, and she is still my coach, even though I have decided I no longer want to be a bike racer; just a fit person. My last race as a “fully committed” bike racer was August 14, 2015. I would love to, however, do a few Friday Night Kreb Cycles races in Riverhead, NY this coming season because they are fun, on the way to the beach, and you could not ask for a better group of people to spend your Friday nights with!

I put the words fully committed in quotations because together they are subjective, and are greatly influenced by the lifestyle you lead. I raced a total of five years. (Yes, I know, not long compared to most people in the sport, but given my athletic background, I feel qualified to write this blog entry.) I had a few jobs during that time, and I even had a year or so where I was unemployed. For the record, being unemployed did not get me into better shape, or make me a better bike racer. I had my worst race season that year.

I worked in finance for a bit, commuting to Wall Street from the Upper Eastside (a horrible commute) and sat on my butt for the greater part of eight hours. Most days, after work, I sat in my care anywhere from 15 minutes to two hours searching for parking. In New York City you do not get to keep the same parking spot (on the streets) all week long unless you would like to pay for a cushy parking garage spot, which would compete to the cost of a nice Midwest apartment. I know because I am from Indiana.

My last year of racing, I worked as an Exercise Physiologist with our most precious population, geriatrics. I taught Strength, Mobility, and Balance classes at various assisted living and independent living homes in Manhattan, Brooklyn, and Queens. I knew prior to taking the job that it would require a lot of commuting, driving, public transportation, and walking. The commuting was tiring and far more than what most people would like to do, especially in the New York City area, but overall I loved the job. Really cold days were awful. Really hot days were twice as awful. I sweat a lot! 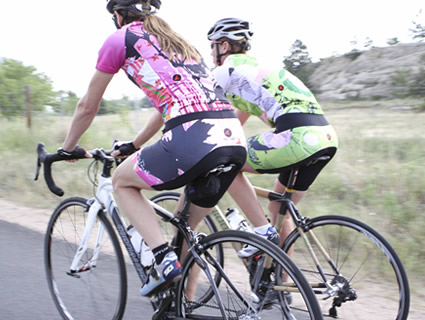 When an ALP Cycles Coach is preparing to work with a new client, or renewing an existing client,t hey ask you to fill out a New Athlete Questionnaire. My favorite questions was always: How many weekly hours do you have to train? Be realistic. TO TRAIN includes, yoga, strength training, etc., not just bike riding. REALISTIC – what is the meaning of realistic to a bike racer?! We all want to do as much as possible to be fit and fast. But was it realistic for me to tell Alison that I had up to two hours per day to train Monday through Friday when I knew everyday of my life would not be stress free; the trains would not always operate flawlessly or at all, the traffic would not be a breeze, the weather would not always cooperate, I would likely not find parking in 15 minutes every time, I would not feel fabulous everyday, and I would not always fee like riding on prescribed ride days. For the majority of my bike racing years with Alison, I rode a total of four, max of five hours, during the week, with two days being rest days. On the weekends, I would ride two and a half to four hours each day, rarely doing two, four hour days back to back. For me, this was really realistic, and the reason why I thrived with Alison’s coaching.

The moral of the story: Be a “Really Realistic” Bike Racer. It is virtually impossible to toe the line with competitors who have the same work/life/family balance challenges as yourself. These are the uncontrollable. The good news is, there are far more controllable; training, diet, sleep, attitude, etc., that can have a positive (or negative) effect on your training and racing. Do not “compare to despair”, as my favorite yoga instructor used to say. Focus on you, and the time that you really, realistically have to give to the sport of cycling, not what your friend or competitor can give. In fact, using this approach with all things in life will make you a happier, healthier, and far more balanced human being!