…cluttering that routine with unnecessary rules is a good way to keep chaotic dialogue going in your head.

This past April and May, I had the pleasure of racing the Cherry Creek Time trial series with ALP Cycles Coaching Athlete, Kimberly Hodes. Kimberly (who is very goal driven – she is a master kettle bell world champion!) and I have been working together since January. When she put the time trial series on her calendar, I agreed to join her as an opportunity to dial in both of our time trial skills and give her some hands-on coaching. We carpooled together in my van from Boulder and made a ritual of meeting for seven consecutive Wednesday afternoons before traffic so we could better our times on the 9.5 mile course with 300 feet of elevation gain.

Our first appearance at the time trial was almost comical – if it could go wrong, it did. From mistiming the warmup, to putting a ding in a brand new Zipp rear disk, to going out too hard from the start and detonating later in the effort. The good news? This was a perfect coaching moment. We could improve our pre-race ritual, mental approach, execution of the ride and post-race ritual. I knew to trust the process and that each week was an opportunity to get better. I suspect Kimberly thought I was nuts.

How could we go from a botched time trial and mediocre performance to being within striking distance to win?

The next week still proved comical as Kimberly nearly took out the starting tent when the volunteer holder decided to hold onto her. But we both reigned in our initial start in order to save ourselves and finished strong during the second half of the ride. Our times shot up the leader board and it fostered confidence and optimism that we were headed in the right direction. We both saw marked power improvements and a steady correlation between our average power and our normalized power. The closer the two numbers are, the more steady of a ride. Time trialing is all about pacing and skating the fine line between going too hard and not hard enough.

The following week, we applied our refined pre-race ritual and aimed for even higher average power. A “strapping young fellow” held the riders at the start and Kimberly was thrilled to get a clean start and not take out the starting tent. She focused on her ride and when her legs started to hurt she told them to just keep going. The result? A win for Kimberly and a near win for myself. Kimberly couldn’t believe it – thinking it was some sort of fluke. I assured her – it was not. It was a testament to her hard work, persistence, perseverance and willingness to try, week in and week out.

Week four I had a last minute trip come up to the South East Speedweek crits and Kimberly had to fend for herself. After creating a well established pre-race routine, she didn’t let the change mess her up. Instead, she took everything she needed in her own car and made her way to the start, getting into the zone for her warmup and won again! She dialed in her mindset and found what worked for her.

When we did a post-race debrief, she said that she felt a little more pressure to perform from her husband and her team since she had two good weeks in a row. What she recognized was that her mindset was the biggest contributor to her success – if you believe in yourself you can do anything. All you have to do is show up to the seating line and ride the best of your ability. Below is her reflective piece on figuring out what worked best for her.

“In a nutshell, there seem to be three types of activities that are done pre-race: required (pinning on the number, getting to the start line, etc.); recommended (inflate your tires, eat a meal x hours before, drink x ounces of water, warmup for x minutes, etc.) and finally, those that I’ll call the ridiculous – activities which are usually linked to the required and recommended, but have no real value in the big picture. It seems like the perceived value of the ridiculous can skyrocket if the activity is performed and the race outcome is a good result. Now what seemed to be an arbitrary thing will be mandatory before the next race. 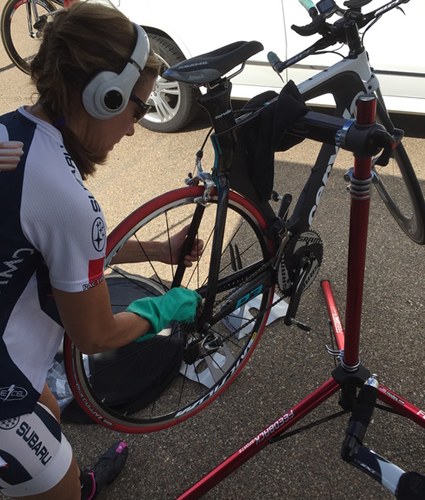 I think the trick is to try to recognize these activities as ridiculous and non-essential, and realize that they can take away from getting into the proper mindset before a race. Having a well-ordered routine is good and can facilitate a calm mind, but cluttering that routine with unnecessary rules is a good way to keep chaotic dialogue going in your head, and plant seeds of self-doubt.

Differentiating between something that is valuable and something that is not can usually be summed up by answering the question: “Is this useful?” Knowing that eating a turkey sandwich for lunch on the day when I have an afternoon TT may seem like it’s not useful, but there is real value in knowing what sits well in your stomach and provides adequate fuel, and that makes it a recommended pre-race activity. It only becomes ridiculous when the caveats enter the picture – like the seven versus twelve pieces of arugula on the sandwich.

It can be very liberating to eliminate the need to keep track of and perform the so-called ridiculous pre-race activities. Why carry the extra burden?”

I returned from my travels and joined Kimberly for the final time trial. we met at my house at 2pm and loaded her accoutrement. We parked in our spot near the start, prepped our equipment, and started our warmups. I could sense a new energy – a mis between nervousness and a little pressure. I think it’s an understatement that we both wanted a win and to complete the series with strong performances. Time trialing can also come down to who wants it more.

When I found my mind drifting during the ride, I brought my focus back on my breath and pushing even power. And when I found my legs protesting, I used Kimberly’s “just keep going” mantra to get me through. Coaching is a two way street – often the best coaching moments come from my athletes. Mouth agape, snot and droll encrusted in my aero helmet, I crested the final hill a mere 3 seconds ahead of the series leader. My first time trial win of the series. Kimberly finished with her best time yet – 24:36 and netting another win, placing second overall in her age group.

Packing up the van that final time was bittersweet. Our work at the Cherry Creek reservoir was done but rest assured we will be back next year ready to improve our times. Maybe next time I’ll try 8 pieces of arugula instead of 7.

Jennifer Sharp, a USA Cycling Level 1 Coach, started racing in 2004 as a means to fulfill her competitive itch. Previously a national level boxer, she grew tired of getting hit in the head and decided to pound the pedals instead. She bought a pink Kona road bike completing several recreational rides and found herself passing as many people as possible. Since then she has multiple podiums at elite track national championships, master track national championship titles and world cup finishes under her belt.