“We rode to the Louisville Criterium course, a moderate course with 1 tough corner and an uphill finishing stretch that is usually windy.”

We think the most important thing a coach can do for her/his athletes, is to ride with them. So much knowledge and information can be gained from seeing an athlete on their bike. A power meter won’t tell you how their bike fit is or how smooth of a pedal stroker they have. A ride file won’t show you their cornering skills (or lack there of). An email can’t do justice in describing a course and explaining how to race it. Intervals done alone will never be as intense or as fun as riding with 10 strong, competitive riders.

Here at ALP Cycles Coaching, we make it a priority to ride with our Colorado athletes. Last weekend was our March ALP Ride and we focused on criterium skills and drills. We rode to the Louisville Criterium course, a moderate course with 1 tough corner and an uphill finishing stretch that is usually windy. 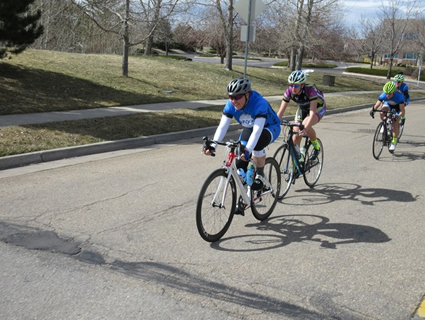 We took a couple of laps on the course together and discusses the things we noticed-rough pavement, open corners, where to pass, where the wind was coming from, and how to get out of the wind. Then we took some laps working on our cornering-looking ahead, carrying speed, navigating around slower riders, etc.

From there, we split up into 5 teams of 3 riders and did 3, 4-lap, mock races. Each race had a goal for the teams to focus on and try to execute team work and team dynamics. The 3 coaches split up and coached on bike-gave directions, helped, told riders where to go and what to look for. We talked about sprinting, making breakaways, knowing which breakaways would stay away, and how to approach the last lap. A lot of information was covered because a lot can go on in a 40 min criterium race.

It was a successful day and a very challenging workout with harder than race pace efforts. The Louisville Criterium is in 2 weeks and we are hoping our hard work during the ALP ride will pay off.