Be as coachable as possible… I had an idea in mind for this blog post, especially after recent events with a few of my athletes and a conversation I had with Alison (Powers). This led me to google things like, “What makes a Champion,” and various similar topics.  Although I did find many useful and accurate references, none conveyed the exact message I had in mind. They were all missing a key point that for me was the difference between success and failure.

Many of you know my history, 5 hip surgeries, lots of complications, 1 month as a patient and graduate (one of my proudest achievements) of the Mayo Clinic for Chronic Pain Program. Despite the predictions and odds, I raced full time for 3 years nationally and internationally. What most people don’t know is prior to the first hip injury, I just wasn’t that talented as a racer or an athlete. I had the will and determination but I was just not gifted in my athleticism or physical characteristics.

When I found out I would be a patient at the Mayo Clinic for a month to learn how to live life in chronic pain, I decided to tackle it like any other challenge I take on. I was going to do whatever it took to get through it. I came across one of Michael Jordan’s quotes. Someone had asked him how he went from being cut from his high school team to one of the best to ever play the game and he said something to the effect of, “I just tried to be as coachable as possible and worked harder than everyone else.” That became my mantra for the month I spent as a patient at the Mayo Clinic. I was going to listen, and do whatever asked of me for the entire time I was there. I was one of the few who did “graduate” and was invited back for several years as a guest speaker.

Then, after a few years off the bike, I started riding again. And I remembered my mantra and ended up coming back with a laser focus that I never had prior to breaking my hip. I was a completely different athlete the second time around and went on to race nationally and internationally for 3 years , earning several podiums at national events. Some were in disbelief and some asked how I did it.  How did I do it? There were two main reasons:

Physically I was limited, no way around that. I did become super analytical and specific in my training (which led to becoming a power and training data specialist and ultimately a successful coach) but I also was 100% committed to doing whatever it took on and OFF the bike to help me become the best cyclist and teammate I could possibly be.

What I am talking about here are the intangibles, the extra 1%, commitment, call it whatever you want but it is the extra piece that can mean the difference between winning and also ran or a DNF.  Never underestimate the power of the intangibles.

What are the intangibles?

1) Mental focus. 100% of the time whether training or racing. This is another article on its own – stay tuned in 4 weeks.  J But without mental focus, you are literally just spinning your wheels.

2) Be Coachable. Be honest. Be moldable and trust your coach. Ask questions for sure but follow the plan laid out for you, do the work, and upload/record the work and give feedback so that your coach can in turn do whatever it takes. Communicate with your coach and never lie about training (either doing more or less). Put travel or special considerations in your calendar or emails, don’t be afraid to say when you are tired or sick. I often tell my athletes that I am only as good as the information I get.

3) Take an active role in your development.  Look at the plan laid out for you, understand where you have been and where you are going.  Track your own progression.  Understanding your own training will only give you more confidence.

4) Take responsibility for not only your training but also your equipment. I once had a coach and team director that told me, “there is no such thing as having an equipment issue”. A little harsh and not completely true but you get the point. Do not self-sabotage yourself.

Get comfortable on your bike to maximize performance and record all bike fit measurements in measurements YOU understand and can be consistent with across multiple bike manufacturers. Trace cleat placement so replacing them is easy. Check this measurements regularly. Parts slip, screws loosen, crashes knock things out of place.

Clean and maintain all equipment. A clean bike is a fast bike. Not only that, but regularly cleaning your bike also means you are regularly checking equipment and will notice wear and tear, things that need replacing, tightened, etc.

5) Bring more than you think you will ever need. Always. Hikers call this “Just gonna’s” Never let yourself have a “Just gonna”. I was just gonna head out for a quick easy spin and then flatted in the rain without a jacket, phone, or spare tube. Even if it is a 1 hour recovery ride bring a little food, pack a spare tube, bring a phone, etc. Take a 5 or 10 dollar bill and put it in your shoe (under the insole) just in case you need it someday. Always carry ID/emergency contact info. When packing for a ride, race, camp, etc. pack and bring more than you think could ever possibly need. Be prepared.

6) Use Time Management. Plan and schedule your time accordingly. Plan ahead. Be realistic, don’t over commit, and allow yourself plenty of time to not only train, but get ready to train, train, and  complete the post training routine ( pack, drive, change, shower, put equipment away, etc.)

Make all of the above routine. Make lists and schedules if you have too. Order a few extra parts or batteries, learn how to do basic bike maintenance. Make recovery days bike cleaning and bike check days. It might seem like extra work at first but it will be worth it. Being prepared and ready for when things do go wrong (and they will) will allow you to calmly address the situation and carry on. All of the above will allow you to be more confident and less stressed in your preparation, your equipment, and ultimately create an environment that will allow you to train and race to the best of your ability.

Do whatever it takes. 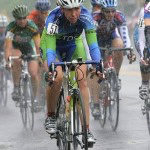 Shawn Heidgen has been involved in cycling for over 20 years. She raced professionally for three years during which she completed 2 Giro D’Italia Donne (Women’s Tour of Italy ) and competed on the National Race Calendar circuit.  Shawn has also coached cyclists of all abilities for many years, and has led and directed training camps all over the world. Shawn also has a unique history, as a former Chronic Pain Patient at the Mayo Clinic (before racing professionally), she overcame what should have been a career ending hip fracture and went on to race professionally. Need some motivation on staying fit and healthy while working from home? We thought it’d be a good idea to ask Canadian National Champion Adam de Vos for his advice during the COVID lockdown.