“Power to weight really comes into play when you are fighting gravity.”

This blog post is a throw back to one of ALP Cycling Coaching’s more popular posts. As the season draws near, should you be focused on pounds, watts, both?

Power to weight ratio. Watts per Kilogram. Race Weight. Three different ways to say it, one simple meaning; however much you weigh, you must have the strength and fitness (power) to move that weight. The theory simply states the less you weigh, and the more power you have, the faster of a bike rider you will be.

Power to weight really comes into play when you are fighting gravity-i.e. climbing. The more body weight you have, the more you have to fight gravity and the stronger you need to be. For example, if I am riding uphill along side fellow ALP Coach Paddy, who weighs 25.30 pounds less than I do, I would be riding along at ~250watts while she is “only” riding at ~215watts. Now imagine if I lost those 30 pounds but kept my power. I would fly up the hill. However, there is a good chance, that in losing those 30 pounds, more than half of those pounds would be muscle mass and thus, I would lose power and not be nearly as strong, as powerful, and as fast on the flats. 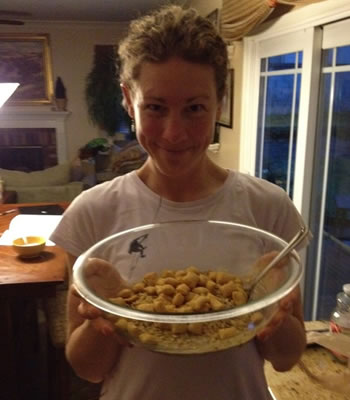 In determining your ideal race weight, first evaluate your goals. What kind of riding and racing will you be doing and what is the terrain of those riders/races? If your answer is long sustained climbing, rides/races with big and or steep climbing, then perhaps, in addition to gaining fitness and power, it’s time to look over your diet and training to see where you can shed some pounds. On the flip side, if the answer is flatter and/or rolling terrain, sprinting and/or sprint finishes, or a moderate amount of climbing, then focus on a good clean diet, but mostly, focus on getting as fit and as powerful as possible. Plus, there’s a good chance that while getting as fit and as powerful as possible, you lose a few unwanted pounds anyway.

In all honesty, I think too much emphasis is put on the power to weight ratio. At the end of the day, the person with the most determination, never-give-up, suffer like a mo-fo attitude will beat the person with better power to weight ratio who can’t suffer and gives up easily. We all want to be lean mean fighting machines. Some will be leaner than others and some will be meaner than others. Focus on your goals, your training, your diet, your mental toughness and fortitude, and success will come-weighing 150 pounds or 125 pounds.