“DOMS means you are challenging your muscles to do something they are not used to doing – and that’s how you get stronger.” 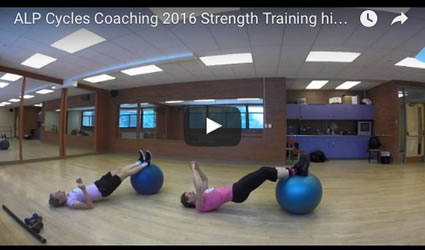 After spending 4.5 hours re-creating our Off Season Strength Program last Saturday, I was sore. My gluten, upper back, and hamstrings all had signs of DOMS. DOMS (Delayed onset muscle soreness) is a common result of physical activity that stresses the body and more specifically, the muscle tissue, beyond what it is accustomed to. As a cyclist, my muscles are used to contracting congenitally – meaning they push and the muscle shortens. This means, I (and most cyclists) get sore easily when starting a new activity that makes our muscles contract eccentrically – strength training, running, etc.

After participating in some kind of strenuous, particularly something new to your body, it is common to experience muscle soreness. This soreness, DOMS, can start as soon as six to eight hours post-exercise, and peak around the 48 hour (2 days) mark. DOMS is the product of inflammation of microscopic damage to the muscle fibers involved in the exercise.

DOMS can occur anywhere in the body that has recently been exposed to unfamiliar or intense physical activity. While most exercise can induce some DOMS, exercise with a greater emphasis on the eccentric phase (muscles lengthen while force is applied – i.e. resisting the weight) plays the most significant role in the manifestation of DOMS.

One of the best ways to reduce the severity of DOMS is to progress slowly when starting a new exercise, workout or training plan. Taking the time to allow the muscle to adapt to new stress should help to minimize the severity of DOMS, but it is unlikely that soreness can be avoided altogether. Proper warm-up is also important in preparing the muscle for the types of forces that may cause damage.

DOMS is not a bad thing – unless the soreness gets in the way of daily activities, then you may have over done it. DOMS means you are challenging your muscles to do something they are not used to doing – and that’s how you get stronger. To aid in recovery, post workout be sure to do a short cool down, consume protein (Osmo recovery drink) to help your muscles start to recover, foam roll, and stretch. Once DOMS is gone, you should be recovered, and ready to challenge your body again.

Have a very happy holiday and here’s to DOMS and getting stronger.