How about making this year’s resolution about your bike riding? Pick one thing that you know you need to do to make yourself a better bike rider and/or faster bike racer.

This one thing usually isn’t something sexy like bigger watts, longer rides, or faster on the time trial bike. This one thing is usually something hard and not as enjoyable to work on. Something like- becoming a better and more confident cornerer, working on riding in a pack and staying out of the wind, being able to clear technical sections on your mtn bike, improving leg speed, improving your power to weight ratio, etc.

Setting up cones in a parking lot and working on your bike handling skills isn’t nearly as motivating as a 4hr tempo ride with lots of climbing. But if you are braking in every corner in a crit, descent, or CX race and losing 2-3 seconds, it doesn’t matter how much tempo and climbing you can do because you will be so fatigued from sprinting out of every corner you won’t be able to contend for the win.

Every off-season is a chance to work on your weaknesses. When I was first starting out bike racing, I didn’t know what to work on—so I asked Jim Miller (head honcho at USAC). He said I needed to build more horsepower; “ride with the boys” is what he told me. So I called up any pro men that I knew and rode with them. It killed me, but it made me stronger. Next was leg speed, so I got a fixie with a tiny gear and pedaled that during the winter. Now that I had this new power, I needed to be able to get the finish of a bike race fresh, so I needed pack riding skills. Group rides it was, and learning to bump, overlap wheels, and ride within 2-4” of the wheel in front of me. These things were very uncomfortable for me to work on and not as much fun as riding my myself, but I did it because I knew they would help me win bike races. Every ride and every race was a chance to learn and get better.

No matter how good you get or how often you ride your bike and follow your training plan, there is still something you can do make yourself a better and more complete bike racer. These, what may seem like small but are very important things, can range from- improving bike handling skills, losing unused weight (fat), learning to rest and recover, taking care of your body, learning to read a race, working on your mental game and confidence, etc. The list is endless.

No excuses. If you know you need to improve an aspect of your cycling, then do it. If you don’t know what you need to improve or how to work on your weaknesses, then ask—a coach, a teammate, your team director.  Don’t waste your time. Don’t go year after year with the same weaknesses in your bike riding. Work on your weaknesses, dial in the things that are tough and hard, and make yourself a better and more confident bike rider. Start now. No need to wait until New Year’s.

Happy training, and happy working on the hard things. 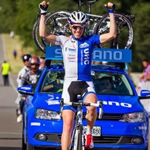