How to Stay Motivated for Racing in the Summer Months My favorite way to keep training fun is to ride different bikes.

It’s finally summer time.  The weather is nice and the days are long. However, for many bike racers, July is a tough month, motivation wise.  Early season races have come and gone, goals have either been met or not quite achieved, you pretty much know how your season is going to turn out, and the motivation to train and race is weaning.   Just as bike riding is at its best, people are tiring of riding and training.

The question becomes how to stay motivated to train and race through the entire race season which can last until September.

For most of us, having a goal is the #1 motivation to ride our bike.  This goal can be as simple as finishing a charity ride or Grand Fondo to something more intense such as winning a national caliber stage race or Master’s Nationals.  However, if your cycling goal is in the spring or in the beginning of the summer, once your goal ride or race is finished, it’s easy to lose the motivation to keep training.  This is why it’s important to have another goal in mind for later in the season. This way you keep your bike riding and racing motivation going strong. 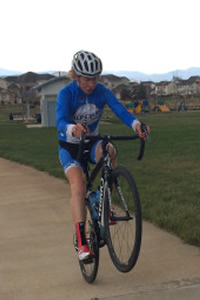 While training for goal #2, it’s important to keep it fun. By this time in the season, most of us are tired of doing intervals, and are tired of riding the same roads over and over. The best ways to beat these “midseason blues” are to find ways to mix up your riding. Try riding new routes with new people or riding at different times of the day. Mix up your interval sessions by doing them up a hill or change the length of each interval and rest period.

My favorite way to keep training fun is to ride different bikes. If you are a roadie, summer is a great time to hone in your bike handling skills (not to mention build great seated power) with mountain biking a couple times a week. You can even throw in a short track race here and there to take place of your VO2 intervals. If you are a mountain biker, spend some time on your road bike and add in a road race or two to test out your fitness and race tactics.

Cyclocross racing is a great goal #2 or goal #3 to have. Cyclocross mixes both road racing and mtn bike racing and is a fun way to stay in race shape and work on your skills in the fall and winter months. Come July, if you are tired of racing and training, it’s the perfect time to take a break from racing, spend some fun time on your bike and aim to ramp up for the Cyclocross season that starts in late September.

Here are a few workouts to keep training and motivation fresh

– Bottom to top intervals – using the terrain available; ride hard from the bottom of a climb to the top of the climb. Really push it all the way to the top. Recover on the back side.

– Hour of Power – put that power meter away and just go out and ride hard. Sprint to speed limit signs and push the pace after the sprints.

– Friendly attacking or group rides – Ride with a friend and take turns “attacking” each other as you would in a race or join a spirited group ride that challenges you with city limit sprints or climbing out of your comfort zone.

Happy training and remember to enjoy each bike ride.

2020 has started in a very unique way. Because of that, we have decided to follow suit and do something unique as well. We are moving our annual Climbing Challenge from October to May.

In the past two weeks, life has drastically changed. We’ve gone from excitement for the race season and ready to test our fitness and hard work, to being holed up at home and unable to see our friends and family. Our lives have been turned upside down.