“If all else fails, try taking melatonin 30 min before bedtime.”

A lot of us use exercise to improve our sleep. However, for many of us, after a hard training ride, it can be tough to get a good night sleep.

Here are some tips to help ensure a better night sleep after a hard bike ride.

-Timing: Aim to do your workout earlier in the day. This is because when you finish a workout, the body takes a long time to calm down. Endorphins and other chemicals have been released to make you more alert and energetic. Your body is also slow to fully cool down and calm down after exercise, and until this happens, you will be fighting an uphill battle when trying to relax and sleep. In fact, exercise can cause your core temperature to be increased for four or five hours after working out.

-Caffeine: As cyclists, we all like coffee and caffeine. In fact caffeine can be a performance enhancer and help us torrid harder, longer. However, caffeine late in the day can be a sleep inhibitor. Caffeine can stay in your system for as long as 8 hrs, so aim to have your caffeine intake finished by 2pm. This includes recovery drinks. Many recovery drinks add caffeine or ingredients that contain caffeine. 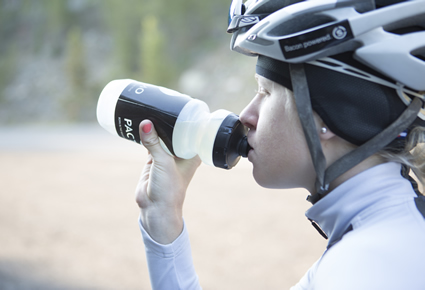 -Electronic Devices: The blue light of electronic devices (TV’s, computers, phones, iPads, etc.) prevent the release of melatonin, a hormone associated with nighttime. Instead of watching TV or looking at a computer before bed, read a book or magazine to relax.

-Aches and Pain: Your body may be sore after a hard workout and your legs may ache. Wearing compression socks, foam rolling, stretching, etc., after a workout is recommended. However, you may still go to bed with aching legs. In this case, I recommend taking Ibuprofen. There are many theories on Ibuprofen, both good and bad, but my thought is if you aren’t sleeping due to aching legs, then you are not recovering. So it’s better to get rid of the aches and pains so you can sleep and recover.

-Hydration: Hydration plays a huge role in performance and recovery. Drinking enough water throughout the day, especially around exercise, can help regulate the sleep cycle. Dehydration can also lead to melatonin deficiency, which disturbs the sleep cycle.

If all else fails, try taking a melatonin 30 min before bedtime. I also like Valerian rood ant tart cherry juice (tip from Stacy Sims).