Time trials: a moment of truth and arguable the purest form of cycling. One human against the clock attempting to pedal their bikes as fast as possible against one thing that remains constant – the passage of time.

Time trialing requires constant focus and attention and pushing deep into the pain cave. Some people love it – most hate it. And according to Wikipedia, the hour record is the most prestigious record in all of cycling.

This February, America’s sweetheart of cycling Evelyn (Evie) Stevens will attempt to break the women’s UCI world hour record on the 333.33 meter covered velodrome in Colorado Springs, Colorado. She only has to go 46.883 km to beat the record set in January by Bridie O’Donnell in Adelaide, Australia. That’s only 29.132 miles an hour.

I repeat: over 29 miles an hour for an hour.

Besides going faster than a school slow zone, a lot of factors go into whether or not she will make it: how aerodynamic she is on the bike, the temperature inside of the velodrome, her starting pace and what power she’s able to sustain for that duration, her nutrition and hydration, etc.

What also makes this attempt special is that Evie is doing this effort on a fixed geared track bike. Unlike a regular time trial bike, she’ll only have one gear and she’ll have to maintain a steady, constant speed to cover as much ground as possible. As with all time trials, pacing is critical. So is the ability to stay on the razor’s edge of discomfort and producing power. 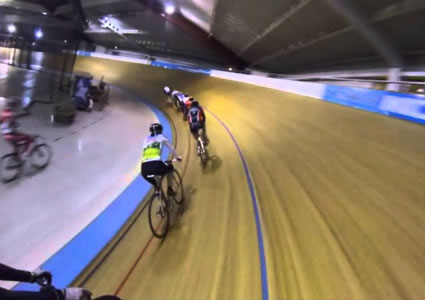 While you may not be attempting an hour recored any time soon, Evie’s attempt creates an awareness of what goes into becoming a good time trials. Below are a few tips…

PACING, pacing, pacing!!! You may feel good and fresh from the start but your perceived effort lags behind your actual power. It’s important to remember: you want to maintain the highest power you can over the set duration – not in the first five minutes. Having a power meter is a great tool to accurately measure your effort.

Focus and use positive self talk. Time trials are uncomfortable. You are at your limit for the amount of power you can produce for an hour. It’s also extremely hard to focus for that long of a time period without your monkey mind taking over. Focusing on your breath and using positive self talk such as, “better, faster, stronger” can help you stay in the zone.

Good nutrition before, during and after. You are what you eat, and time trial day is no exception. If you want to be a champion, you have to pay attention to all of the details like a champion – especially nutrition and hydration. Beforehand, you’ll want to eat foods that are light and easy to digest. Research and experiment with what nutrition and hydration strategies work for you and practice them beforehand. AL Cycles highly recommends Stacy Sims at OSMO Nutrition for products and fueling and drinking guidelines.

Whether you’re attempting an hour record or doing a local time trial series this spring or summer, practice, pacing, self-talk and focus can all come together on race day to produce your best possible result. If you want to dial in you time trialing ability even further, contact ALP Cycles Coaching so we can create a customized training plan for you today.