“It’s something I’ll never forget and I think it gave me just a taste of what it’s like to be a cyclist in Colorado.”

Rich Lavigne, one of our 2016 Brand Ambassadors, won the Grand Prize of an all expense paid trip to Colorado to meet with Pactimo, do some riding and learn from Alison Powers. Below is part of the blog he wrote about his experience. Be sure to check out the full blog on the Crank Addicts website.

“In February of 2016, I learned that Pactimo Clothing Company was looking for Brand Ambassadors for the 2016 cycling season and I thought it sounded like a cool idea. They were looking for enthusiastic and passionate cyclists that would spread the word about Pactimo’s great products via social media and word of mouth interactions with cyclists they come across on the road. I first learned of Pactimo Clothing when I was designing our Crank Addicts 2014 team jerseys and was immediately impressed with the quality, fit and function. To become a Brand Ambassador, Pactimo asked hopefully to submit a roughly one minute long video that captured the theme of “Why I ride.”

On March 16th, I was informed that I had been chosen to be a Brand Ambassador along with 15 other cyclists across the US. To add a little more excitement, Pactimo was going to post all of our videos to their website and ask viewers to vote on which video was the best and the Brand Ambassador with the best video would win the Grand Prize, an all expense paid trip to Colorado, to visit Pactimo headquarters and do some epic Colorado cycling, including a coaching/riding session with triple national champion, Alison Powers. When the videos were posted and voting started, I took advantage of all the social media outlets I have available to me. I spoke to as many of my fellow cyclists as possible, spreading work through the groups of cyclists that I ride with regularly and they were all very supportive.

On April 1st, Pactimo announced the Grand Prize winner and I was shocked to see my name. I’ve never won anything like this before and I was waiting for someone to wake me from a dream. Fortunately, it wasn’t a dream and Pactimo Brand Manager, Josh Cook, reached out to me a few days later to start the planning process. Josh had some epic plans and I couldn’t wait to get out to Colorado to meet him and everyone else at Pactimo. I wasn’t sure if I’d have the lungs to ride well at elevation in Colorado, but I was going to do my best ago make sure I had the legs to do anything that Josh had planned. 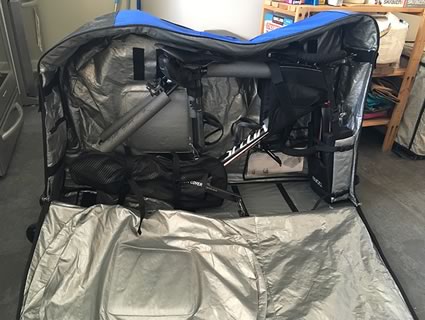 Rich’s Bike all packed up and ready to go!

Day 1 started off early for me, with a 3:00am wake up to get ready for the flight out to Colorado. To maximize the amount of time I had in Colorado, I decided that I’d be on the first flight out of New Jersey on Wednesday morning. That meant a 6:00am flight which would get me to Colorado at 8:15am. We planned to be riding everyday and some of the days involved some pretty serious climbing, so I thought it would be best if I brought my own bike. I picked up an EVOC bike bag and had everything packed and ready to go the day before my flight. I chose to bring my Specialized Allez Comp and kept the same set up that I had used for Tour of the Battenkill because I anticipated seeing some dirt and gravel roads. 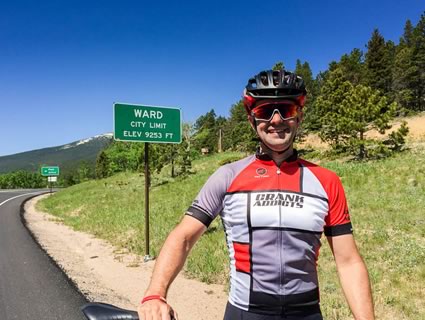 Unfortunately, the trip started off on a rough patch, with the car service I had scheduled to pick me up, showing up late. Luckily, I made it to the airport, got my bags checked, and got through security with just enough time to run through the terminal and get to my gate before the doors closed. It was a stressful start, but I was on the plane and on my way. Next stop, Denver!

I landed in Denver at 8:15am and scooped up my checked bags pretty quickly. I was happy to see that the EVOC bag had done its job and my bike had arrived without any problems. Josh picked me up at the airport and we stopped to grab some breakfast on the way into the Pactimo offices. From the outside, the Pactimo offices are pretty nondescript, fitting into an ordinary looking office park, but when you get inside and have a look around there are some pretty cool things to see. Josh gave me the full tour, which included a pretty detailed history of how Pactimo has evolved from a custom only clothing supplier into a fully branded cycling apparel company with its own unique identity. Josh also introduced me to everyone that works in the Denver offices, including CEO, Frank Kim……..”