When it comes to riding in low light conditions, neon bright clothes alone just aren’t enough. At least that’s the theory being put forth by an Australian study, which purports that cyclists are putting themselves at greater risk if they rely solely on high-visibility apparel when riding in close proximity to traffic during times of low light or at night. Along with a set of good bike lights, adding reflectivity to the equation decreases your odds of getting squashed by a bus, say researchers from Queensland University of Technology in Brisbane.

“We found that crashes disproportionately occurred during low-light conditions such as at dawn, dusk or at night,” said Dr. Philippe Lacherez, a post-doctoral fellow in the university’s school of optometry and vision science, who surveyed 184 cyclists who had been involved in collisions with cars about the conditions surrounding the collision. “Only 34 percent of cyclists in these low-light crashes were wearing reflective clothing and 19 percent of them said they weren’t using bicycle lights at the time of the crash.”

Pactimo is doing its best to right this wrong with its new line-up of fall riding gear, which mixes dashes of hard-to-miss neon yellow with accents of pixel fabric, an innovative material that has reflective elements impregnated directly into the cloth. The fabric is similar to that used in the Sugoi Zap jacket. During daylight it looks like any other piece of cycling wear. But at night when it’s hit by the headlights of a car, the fabric illuminates, making cyclists easier to spot — and presumably safer.

Read the rest of the review on RoadBikeReview.com 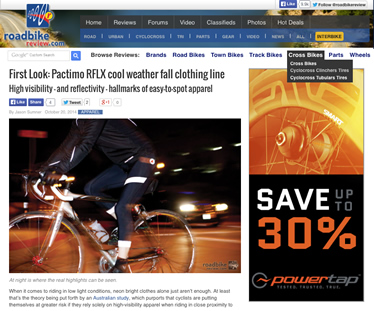 Unlike most of our competitors, we own our factory and everyone who works there is an employee of Pactimo. That means we aren't leasing space in random factories around the globe where they may be making bedspreads one day and cycling clothing the next. This year’s inaugural SBT GRVL (Steamboat Gravel) did not disappoint. Steamboat Springs was host to an amazing addition to the gravel calendar and they pulled it off in style. "We got up early in the morning for our Journey to Goodland Kansas where I was about to embark on a 9-day bike ride; I had never done anything like this before and was excited for this new challenge. Despite having started packing the week before, I was up till midnight checking on gear and feeling like I was forgetting something. We left Missouri at 7am and seemed to travel forever. About 8 hours later, we rolled into Goodland and got ourselves checked in and a camping spot secured for the night."